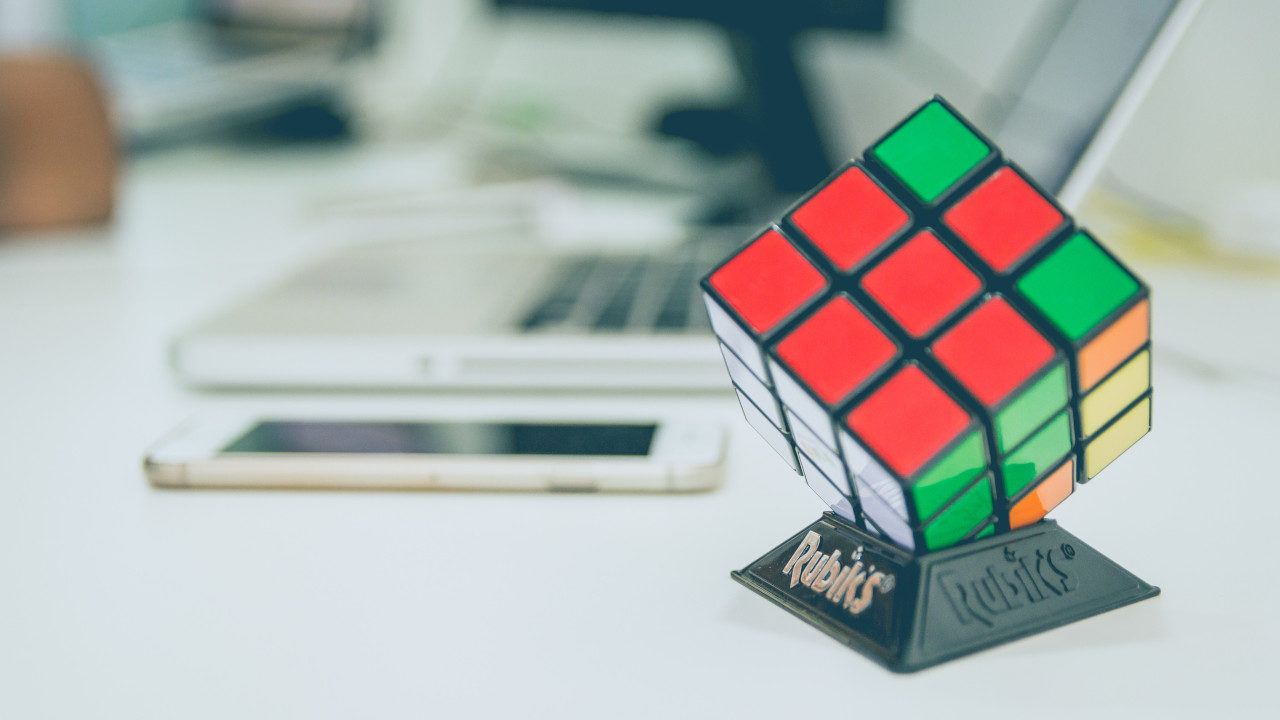 This is the first in an open ended series of blog posts in which I describe my approach to working on a large AI project. At the time of writing I have just started with this endeavor. But whether I achieve my goal of creating an algorithm that solves Rubik’s Cube without prior human knowledge, or whether my research goes down a different path, my hope is that this blog will be helpful to anyone who is new to machine learning or research in general.

The Rubik’s Cube is a popular combination puzzle. Like any other cube it has six sides, but each side consists of six panels. In the sorted (solved) state, there is exactly one color on each side of the cube. You can turn each side independently and thereby re-order the colored panels. The problem is to sort the cube again, after you’ve scrambled it.

There are 43.252.003.274.489.856.000 possible configurations of the Rubik’s Cube. This makes this puzzle very hard to solve with pure reinforcement learning (RL) techniques, because once you are in a scrambled state, it is exceedingly unlikely that you stumble over the solution by taking random actions. Taking random actions, however, is exactly what a typical untrained RL agent does.

Recently, McAleer et al. managed to write a program (“DeepCube”) that learns to solve Rubik’s cube without prior human knowledge , except for an abstract representation of the cube. Check out my other blog post for a summary.

In the present project, my goal is to go one step further and solve a somewhat more difficult problem than that of McAleer et al., as I describe in the next paragraph. For instance, in my problem the algorithm is only provided with a description of the goal, and cannot learn by starting from the goal state, as DeepCube does.

The idea is this: I want to create an algorithm that is given only images of the cube, as well as a set of actions that turn its six sides. After each turn it can observe a new set of images of the (now) modified cube.

To solve the objective above, I plan to construct an algorithm with three components.

A representation component that generates an abstract representation of the environment / Rubik’s Cube. This might be achieved with a generative query network , or some variation of it.

The actor component uses algorithms generated by the manager component to move the current state of the environment towards the goal state (e.g. using Monte Carlo tree search and some distance heuristic). The latter is given as a list of images or textural description of the solved cube, as mentioned above. This description is encoded using the representation component.

My Rubik’s Cube project is a playground for trying out different machine learning techniques. But the specific long-term goal outlined in this post should act as a guide, as well as a source of new problems to solve.

This is my first blog post (ever!), and also my first large machine learning project. I hope you enjoy reading about my journey into the exciting field of artificial intelligence, and I very much appreciate your constructive feedback.

My website uses some cookies that come with WordPress. By clicking “Accept All”, you consent to the use of ALL the cookies. But you may as well reject them.
Cookie SettingsReject AllAccept All
Manage consent

This website uses cookies to improve your experience while you navigate through the website. Out of these, the cookies that are categorized as necessary are stored on your browser as they are essential for the working of basic functionalities of the website. We also use third-party cookies that help us analyze and understand how you use this website. These cookies will be stored in your browser only with your consent. You also have the option to opt-out of these cookies. But opting out of some of these cookies may affect your browsing experience.
Necessary Always Enabled
Necessary cookies are absolutely essential for the website to function properly. These cookies ensure basic functionalities and security features of the website, anonymously.
Functional
Functional cookies help to perform certain functionalities like sharing the content of the website on social media platforms, collect feedbacks, and other third-party features.
Performance
Performance cookies are used to understand and analyze the key performance indexes of the website which helps in delivering a better user experience for the visitors.
Analytics
Analytical cookies are used to understand how visitors interact with the website. These cookies help provide information on metrics the number of visitors, bounce rate, traffic source, etc.
Advertisement
Advertisement cookies are used to provide visitors with relevant ads and marketing campaigns. These cookies track visitors across websites and collect information to provide customized ads.
Others
Other uncategorized cookies are those that are being analyzed and have not been classified into a category as yet.
SAVE & ACCEPT