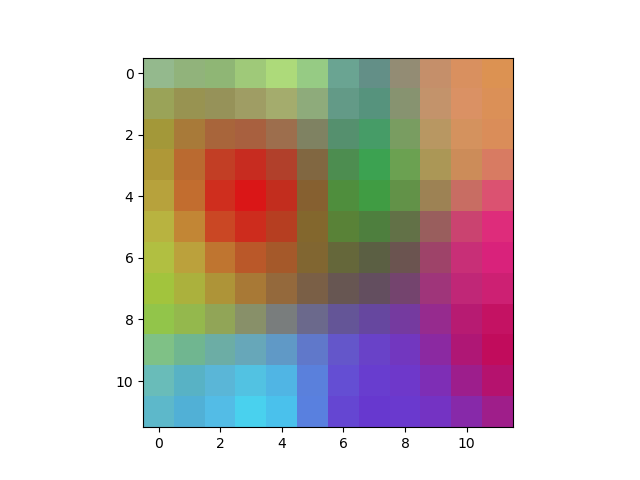 Recently, I discovered this neat little algorithm called “self-organizing maps” that can be used to create a low-dimensional “map” (as in cartography) of high-dimensional data.

The algorithm is very simple. Say you have a set of high-dimensional vectors and you want to represent them in an image, such that each vector is associated with a pixel of that image, and the similarity between vectors should correspond to the distance between pixels.

As a first step, we associate a random vector with each pixel in our map. Then we go through the input vectors and compute the “best matching unit” (BMU), which is the vector in our map that is closest to the input.

Now we update the BMU, and vectors that are close to it on the map, to be more like the input vector. How strongly we shift the vectors may depend on the distance from the BMU, and with each new input, the sphere of influence should decrease.

For example, we can take the RGB vectors of 1000 random colors as inputs, and create a 2D color map:

Here is a simple (non-optimized) python source code that generated the image above:

view raw simple_som.py hosted with ❤ by GitHub
This and That
#competitive learning
Previous Post
How AI may impact your life and how you can help making this impact a positive one
Next Post
Representing concepts efficiently

My website uses some cookies that come with WordPress. By clicking “Accept All”, you consent to the use of ALL the cookies. But you may as well reject them.
Cookie SettingsReject AllAccept All
Manage consent

This website uses cookies to improve your experience while you navigate through the website. Out of these, the cookies that are categorized as necessary are stored on your browser as they are essential for the working of basic functionalities of the website. We also use third-party cookies that help us analyze and understand how you use this website. These cookies will be stored in your browser only with your consent. You also have the option to opt-out of these cookies. But opting out of some of these cookies may affect your browsing experience.
Necessary Always Enabled
Necessary cookies are absolutely essential for the website to function properly. These cookies ensure basic functionalities and security features of the website, anonymously.
Functional
Functional cookies help to perform certain functionalities like sharing the content of the website on social media platforms, collect feedbacks, and other third-party features.
Performance
Performance cookies are used to understand and analyze the key performance indexes of the website which helps in delivering a better user experience for the visitors.
Analytics
Analytical cookies are used to understand how visitors interact with the website. These cookies help provide information on metrics the number of visitors, bounce rate, traffic source, etc.
Advertisement
Advertisement cookies are used to provide visitors with relevant ads and marketing campaigns. These cookies track visitors across websites and collect information to provide customized ads.
Others
Other uncategorized cookies are those that are being analyzed and have not been classified into a category as yet.
SAVE & ACCEPT